Is Topbuzz a scam? As a quick note to my regular readers who normally come here for recipes and nutrition info, you probably don’t care. But if you’re a content creator like me, you may have the same question that I had on my mind when I got an email that looked like this: 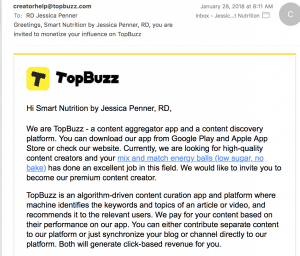 It looked like an easy way for me to increase the reach of my content here at Smart Nutrition, but I was a bit worried about whether this organization was legit, because I’d never heard of it before.

Reddit commenters say that Topbuzz is linked to a Chinese media consortium that is aggressively trying to penetrate the North American market. There’s a lot of mixed discussion about whether it’s a good idea to join up with them. Some commenters are concerned about the legal details, as it seems Topbuzz gets never-ending rights to use your material. Others said they saw their Youtube revenue go down after joining Topbuzz.

I also found this article, which points out multiple other issues with Topbuzz as a content stream.

But I was mostly concerned with whether or not I was going to get scammed in some way. Nobody had really answered my question of whether or not topbuzz is a scam, but it seemed more legitimate than not, so I decided to try it out.

That was almost a very costly mistake.

When I signed up, Topbuzz wanted me to login through Facebook. I’ve done that with other organizations and never had a problem, so I did. Then I got a prompt that said Topbuzz wanted access to a list of Facebook pages I administer. That was a new one to me, but I cautiously said yes.

Shortly thereafter, I noticed that my admin rights to my Smart Nutrition Facebook page were gone. I couldn’t access the page that I have spent the last three years building a community with!

A quick google search told me that Facebook is generally unhelpful if you somehow lose your admin rights to a Facebook page, so I feared the worst.

Luckily, I eventually remembered that I have a backup Facebook profile that also has admin rights to my page. I was able to get control of it again using that profile, thankfully. No other admins had been added to the page, so maybe this wasn’t a deliberate attempt to hijack my page.

I reached out to Topbuzz to let them know that this happened to me. I did get a response but it was generally unhelpful. I haven’t encountered any stories of this happening to other people. Did I mess up the process of signing up with them? Did I somehow accidentally remove myself as admin from my own page? I’ve lasted this long without doing something that dumb, so I hope not, but you never know.

So, as a quick answer to the question of “is topbuzz a scam,” I would answer… maybe. I don’t really know. But I can tell you this: I would definitely advise everybody I know to stay away from it.

14 Comments on “is topbuzz a scam? my experience”