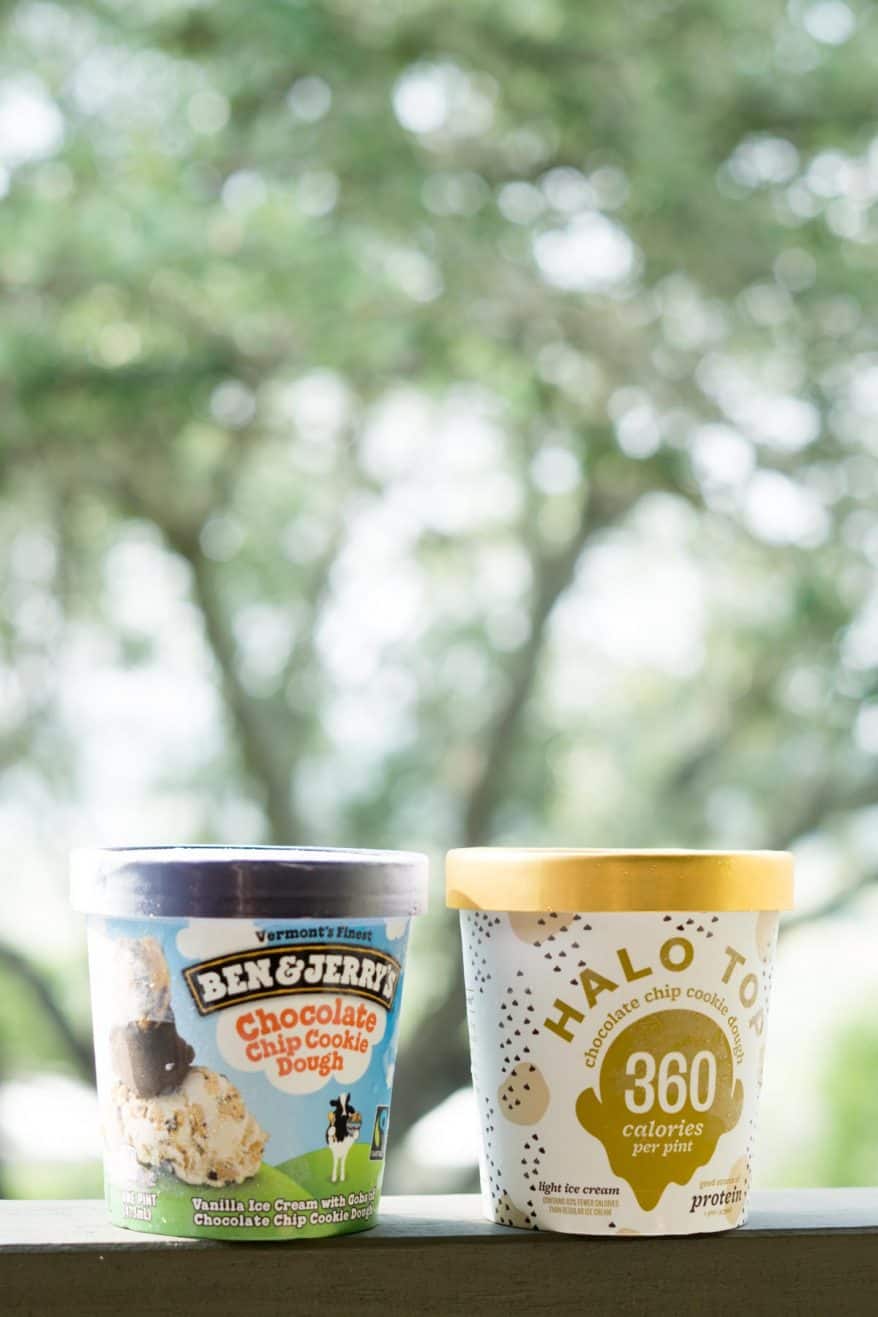 I haven’t been too impressed with “frozen desserts” in the past. I’m looking at you Breyers blue box!

They’re mainly just super-sweet and icky. They don’t have that creamy, rich, melt-in-your-mouth enjoyment that ice cream does.

So I didn’t have high expectations when I heard about Halo Top. It’s advertised as a low-calorie, healthy alternative to ice cream, and I just didn’t think it could possibly compare to ice cream.

As a Dietitian I’m all for making healthier choices in the foods that form the core of my diet. The foods I eat the most NEED to be healthy!

But ice cream? Come on. Don’t mess with my ice cream!

When I have dessert, I usually want it to be the real deal, like this espresso dark chocolate torte or this chocolate mascarpone pavlova with berries. I want to reeeeally enjoy it. I want it to satisfy 100%. And trying to substitute for something “healthier” just doesn’t typically satisfy.

If your eating doesn’t satisfy, what are you going to do? You’ll likely eat more, in search of that satisfaction. So I generally want to make my desserts full of enjoyment and satisfaction.

I figured to do a proper review of Halo Top I couldn’t just eat Halo Top. I needed to compare it to the real deal. So I went straight to the top, the cream of the crop: Ben and Jerry’s! It was also on sale, so that helped me choose from the plethora of ice cream options!

Both brands had peanut butter cup varieties, so I compared those.

I dug into the Halo Top first and to my great surprise, I genuinely enjoyed it! It was a hot day, so I thought that maaaaybe anything cold would’ve been satisfying.

I took a scoop of the Ben and Jerry’s, prepared to be absolutely blown away by how amazing it was. However this was not to be. While the Ben and Jerry’s was good, it wasn’t the mind blowing experience I was expecting it to be. I was anticipating the Ben and Jerry’s to have a super creamy tongue coating mouthfeel, but the texture was actually a little bit chalky.

In the end I preferred the experience of the Halo Top! My four year old also voted it his favourite. While I was a little disappointed that there weren’t any actual peanut butter cups in the Halo Top, I enjoyed the texture and appreciated that they didn’t load up on the sweetness level to compensate for the lower fat. I’ve determined I don’t really enjoy those pay-by-weight frozen yogurt shops because they compensate for the lack of fat by making everything far too sweet.

Comparing only one flavour is hardly giving the two brands justice, so I decided to repeat the taste test, this time with chocolate chip cookie dough! I know, I know, it’s a tough job to do these reviews but someone’s gotta do it. My family and I will take one for the team.

It was another scorcher of a day. After scooping the ice cream into bowls and carrying them out to the balcony, they started to melt nearly instantly, the Halo Top at a much faster rate than the Ben and Jerry’s.

What I noticed about the pooling melted ice cream was that, while the Ben and Jerry’s was certainly quite creamy, the Halo Top didn’t look too bad! With other frozen dessert (ice cream masquerades) and frozen yogurts I’ve noticed that they tend to look rather watery as they melt. When your ice cream seemingly turns to water as it melts, it sure loses several notches of appeal. 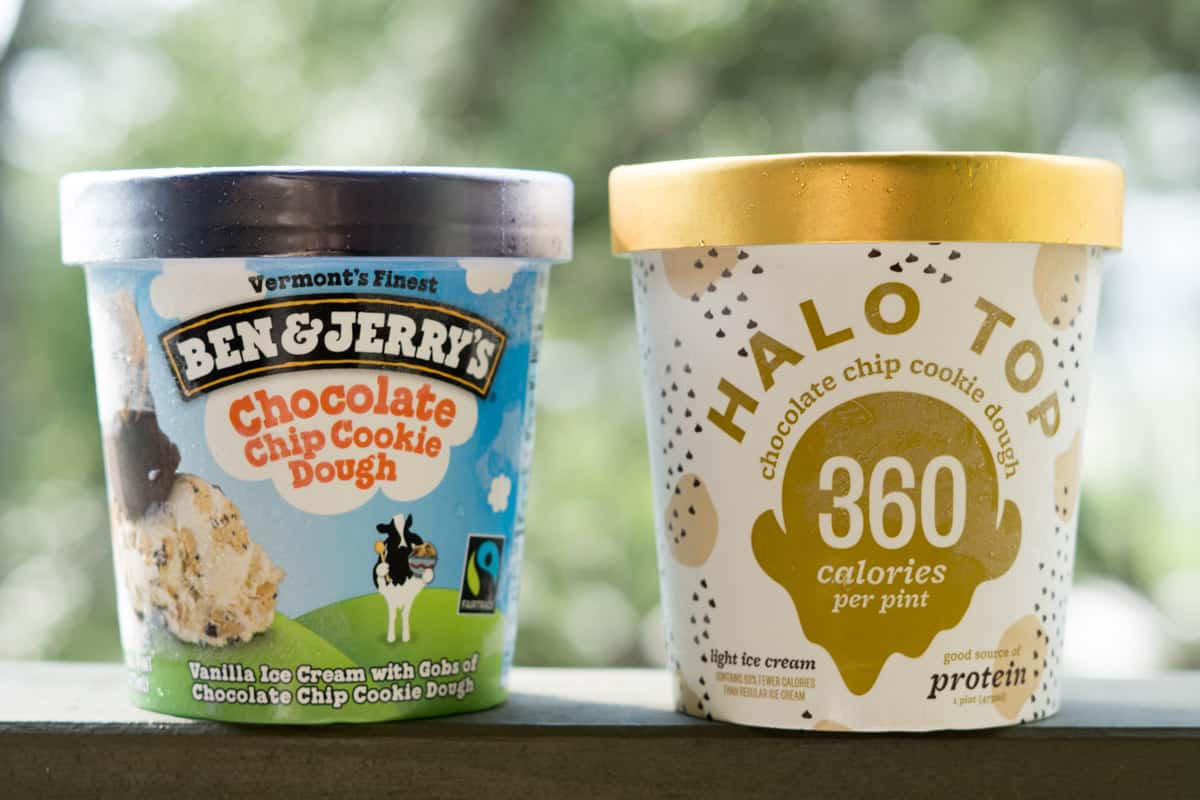 After two taste tests, it was a tie game. I hadn’t been planning on doing a third taste test, but everyone knows you can’t just end a competition with a tie!

I had to go back and buy a couple more. This time we opted to go for the classic: straight up vanilla. Flavours like peanut butter cup and chocolate chip cookie dough are good and all, but they could end up being a distraction from the core ice cream characteristics.

The store didn’t carry vanilla from Ben and Jerry’s so I opted for an equally or possibly even better brand: Haagan Daaz.

This time I scooped the ice cream without the others seeing, so that they wouldn’t know which one was which.  My husband thought to himself that there was no way this could be a blinded test because he would obviously be able to identify the brands by mouthfeel. He tasted both and immediately decided which one he liked better based on the mouthfeel. .

We’re learning first hand how important it is to have well controlled scientific studies. Pre-existing bias can really influence our experiences.

Once my husband found out which was which his pre-conceived ideas started to infiltrate his taste preferences. He found himself starting to enjoy the real Haagan Daaz more than the Halo Top. This is despite recognizing the bias that he was falling victim to!

Halo Top has a higher protein content due to a base of skim milk, and the addition of eggs and milk protein powder.

Halo Top is sweetened with erythritol (a sugar alcohol), cane sugar, and stevia. This results in a very enjoyable sweetness profile. I personally don’t enjoy the metallic aftertaste of stevia. By including some real sugar (in the cane sugar), you get its pleasant sweetness, while still cutting down on the overall calories.

Halo Top has added fibre. The ingredient list just says “prebiotic fibre.” Since you can’t see or taste it I would guess that it’s inulin. In any case, prebiotic fibres are dietary fibre that have been shown to help the good bacteria in your gut to flourish.

Halo Top is not fat-free, which is why you still get a pleasant mouthfeel. Still, it’s not high in fat. I think they also did a good job of creating a nice balance. Fat helps with that satisfaction factor and helps you feel fuller, for longer.

It’s kind of like this: if you’ve ever had a really really reeeallllly good bottle of wine, the experience is incomparable. But you don’t really need to have that expensive bottle of wine to keep enjoying wine. You can continue to buy in your usual price range and be completely satisfied with your experience.

Halo Top may not always provide the absolute best ice cream experience, but it sure comes close!

Price wise a pint of Halo Top is comparable to both Ben and Jerry’s and Haagan Daaz. But, you actually get LESS dessert with the Halo Top!

A little primer on ice cream.

So cost wise, Halo Top is a bit of a ripoff 🙂 You’re paying for air!

If you want to eat a container of ice cream at a time, choose Halo Top. In other words, if you tend to decide how much ice cream to eat by how much space it takes up, you can reliably choose Halo Top and you’ll get great satisfaction with fewer calories.

If you want to enjoy a smaller amount and make the absolute most of your dessert experience, choose real ice cream.

Speaking of quantity…. those Halo Top marketers are doing a good job of convincing you to eat the whole pint. Look what I found when I opened the lid of the chocolate chip cookie dough flavour: 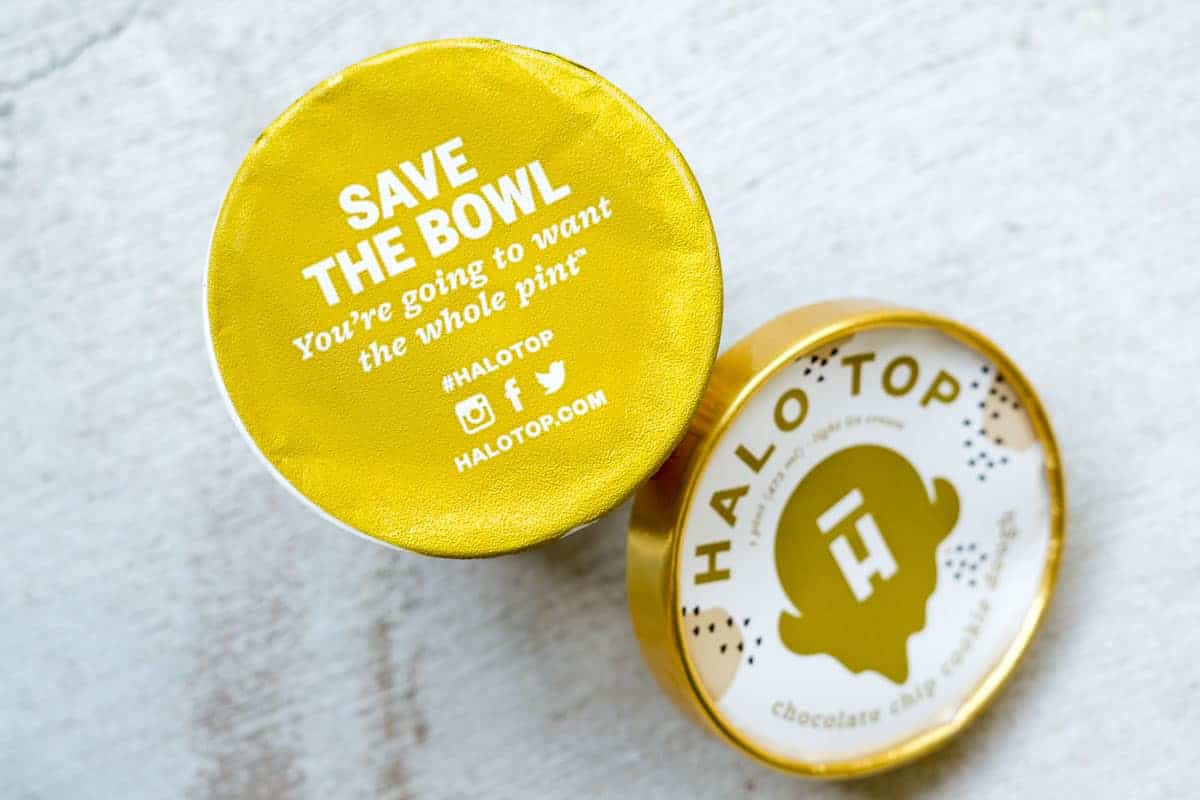 Eating the whole pint kind of defeats the purpose of making the ice cream healthier! The Haagan Daaz single serving is 220 calories and the pint of Halo Top is 240. Which would you choose?

Want to make healthier frozen treats of your own at home? Try these recipes; you only need a blender!

2 Comments on “Is Halo Top a Healthy Switch From Real Ice Cream?”