Home / Nutrition / Soy You Want to Know the Truth? 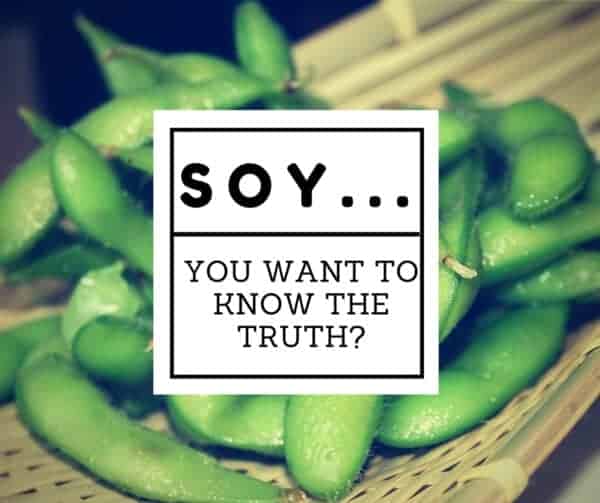 There are so many nutrition myths.  How many, you ask?  Enough that I can’t possibly do an in-depth rebuttal of them all.  Luckily I don’t have to, because there are a lot resources out there.  If I can point you towards those resources, and ultimately towards the truth, then I’m happy.

So, let’s have a quick chat about soy.  Yes, even soy is under attack.  A reader who sent me this picture was understandably concerned by this claim that soy is a cancer-causing, child-killing anti-nutrient. 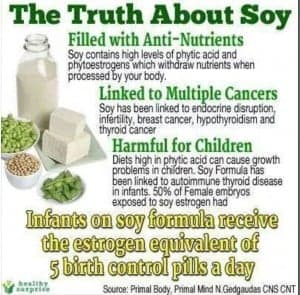 Other people have already summarized the case against this myth exceedingly well.  For a good and thorough read, start with this article and end with this one.

To put in my own three cents about it:

Unless you have hypothyroidism, a moderate amount (about 2 servings a day) of soy has not been shown to have any harmful outcomes. In other words, if you are consuming a reasonable daily amount, the image above is completely false; reasonable consumption is not linked to multiple cancers, infertility, breast cancer, or hypothyroidism.

2) Phytoestrogen is not estrogen

The image above reflects concern about the phytoestrogens in soy, and makes inflammatory claims about how much estrogen we get from consuming soy. It’s important to differentiate between phytoestrogens and estrogen.  They are not the same thing. Phytoestrogens are 1,000 – 10,000 times LESS potent than estrogen produced by the human body.

3) Phytoestrogen in soy – don’t worry about it

Math nerd alert: Naturally occurring estrogen levels in adult women at peak times are between 10.9 to 40.9 mg/litre.   100 grams of soybeans contain 103.9 mg of phytoestrogen (isoflavones, to be specific), and the average adult has 5 litres of blood.

Plain english: In other words, if all the phytoestrogen in 2 servings of soy were absorbed into the bloodstream, it would equal the highest amount of naturally occurring estrogen in a woman’s body.

Does this concern me?  I can see how somebody might be worried about doubling the amount of naturally occurring estrogen in their body, even more so if dealing with infants.  Let me remind you, however, of the above point: they are 1,000-10,000 times LESS potent that estrogen produced by the human body!

So unless your infant is really 10,000 times smaller than a normal adult, don’t worry about it.

Even Soy Can Be Processed

Eat soy.  But as with all food, eat it in moderation, and make lower processed choices. Don’t assume that an extremely processed soy “burger” is a healthful choice, merely because it’s vegan.