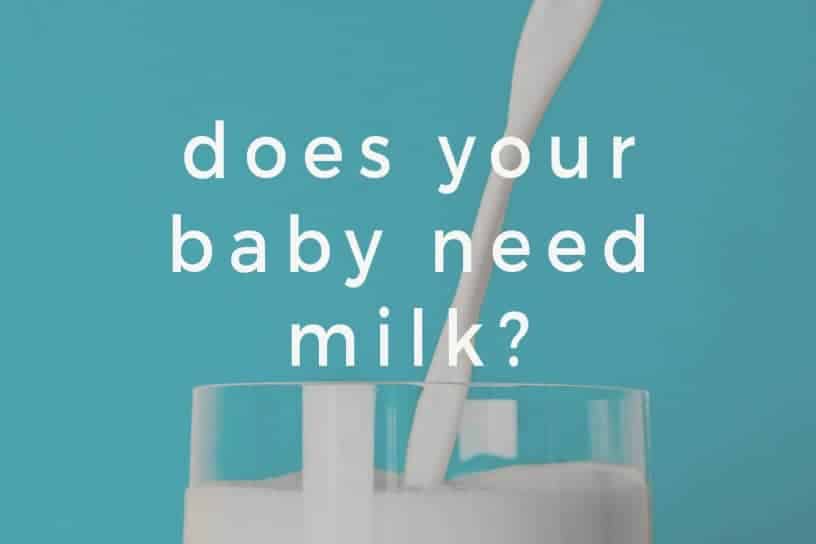 Does my baby need milk?

This is one of the top questions I get asked from parents. The short answer is, yes, your baby does need milk! But the long answer is still needed because the type of milk is key, depending on the baby’s age.

Historically, this question would not have popped into anyone’s minds. It wasn’t until recently that breastfeeding into toddlerhood was the norm. In today’s North American culture, most mothers wean before one year. In fact, breastfeeding longer than 12 months is considered “extended breastfeeding”.

Terms such as that certainly don’t help to normalize breastfeeding! But I digress…

Your baby needs milk. The combination of a fast growth rate and a small stomach means that the majority of food and beverage to enter her mouth needs to contribute to her growth.

one milk at a time

0-6 months: Only breastmilk or formula needed

9-12 months: Whole cow’s milk can be subbed for breastmilk or formula ONLY if baby is eating high iron foods at least 2 x/day regularly

12 months +: Whole cow’s milk can be subbed for either breastmilk or formula

Let’s take a look at why this progression is recommended.

The differences between these types of milk may seem small and insignificant. But the human infant was designed to grow optimally on breastmilk. So it’s very important to transition slowly from a primarily breastmilk (or breastmilk replicate) based diet to a primarily solid food-based diet. Some people don’t realize the significant contribution milk makes to the caloric intake of a child. At 12 months, a child gets approximately 35-40% of their calories from “milk”. It is recommended that a child over 12 months drink between 2-3 cups of milk. This would be 314-461 kcal.

Additionally, blood values of nutrients are tightly regulated. Sodium is mainly regulated by the kidneys. In adults, if there is an excess amount of sodium, the kidneys will filter it out into the urine. If there is not an excess, the kidneys will reabsorb the sodium back into the blood. Sodium levels in breastmilk are relatively low. As such, the human infant’s kidneys are automatically programmed to refilter sodium back into the blood. The regulatory mechanisms slowly mature with age.

There are several milk alternatives on the market. None of them are appropriate for children under two years of age. If a child is no longer breastfeeding and is unable to drink whole cow’s milk, formula should be given.

In the 70s, childhood obesity was on the rise. With good intentions to reduce this trend, some physicians started to recommend that infants be given skim (fat-free) milk. This study shows babies fed skim milk deplete their fat stores to maintain growth in length. Children need the fat for brain development and the additional calories fat provides for growth.

Did you catch the recommended range for milk intake in children I listed above? For the most part, I advocate for a feeding relationship with children that follows Ellyn Satter’s division of responsibility in which the caregivers determine what food is offered, when and where. While the child determines whether they’ll eat and, if so, how much of which foods offered. In this relationship, the caregivers don’t set a minimum or maximum amount of food. Milk, however, can be the exception. I don’t recommend forcing a child who doesn’t like milk to drink it. For those children, you’ll need to be more creative in offering dairy or alternatives in a way they’ll accept (example: cook oatmeal in milk instead of water). On the opposite side, there are children who will happily consume milk all day long to the detriment of other foods. Those children need a milk restriction. Too much of a good thing does exist! Children who drink more than 3 cups (750 ml or 24 oz) of milk a day are at higher risk of developing an iron deficiency. This is because:

4 Comments on “does your baby need milk?”