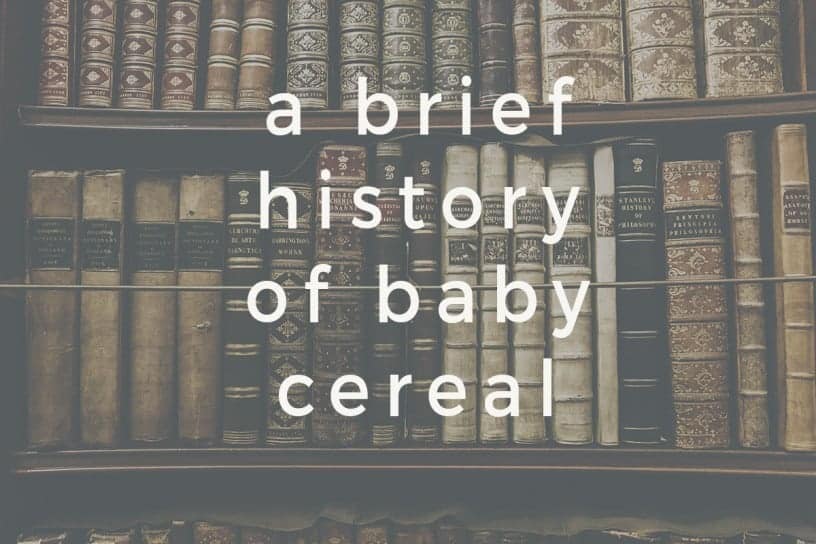 In the late 1920s Helen McKay conducted studies on young children and noticed a slight decline in iron stores from birth to 2 months, no decrease from 2-6 months, and then another drop from 6 months through to the second year. Before this time, the condition of iron-deficiency anemia, as we now know it, was defined but a cause hadn’t been found. This studied helped to link the nutritional intake of iron to anemia.

During this decade, it was common to wait until a child was 1 before introducing solid foods. First up was a sieved vegetable soup, potatoes at 18 months and then other veggies at 24 months.

When the importance of iron was discovered, they knew they needed to start feeding baby solids a lot sooner. By 1935 it was common to introduce solids between 5-6 months of age.

At the same time, fortified infant cereal was invented by 3 Canadian Doctors at the Toronto Hospital for Sick Kids and was sold under the brand name Pablum. The powder could be made into a thin soup and fed to babies at an early age. At this time, Pablum contained several added vitamins and minerals, including iron. Its invention was heralded as a Public Health success and its widespread use has been attributed with decreasing the rates of nutritional deficiencies in infants and toddlers.

The excitement of introducing solid foods to babies took hold and people started to feed their babies at younger and younger ages. In Minnesota in the 1960s, it’s estimated that almost 80% of babies were already being fed complementary foods by 1 month of age!

What kind of food could a baby of 1 month old possibly ingest? Pablum, of course! And thus, despite more recent delays in introducing solids to babies at 4-6 months: an age when babies would be able to handle a thicker texture, infant cereal became firmly established as THE first food for baby. This tradition continued until quite recently. One of the reasons rice cereal, in particular, became so prevalent as baby’s first food is that rice carries a very low risk of causing allergies. And until recently, it was thought that waiting to introduce more allergenic foods would help to prevent an allergy from developing. This theory turned out to be false and we now recognize that waiting to introduce highly allergenic foods beyond 4-6 months does nothing to prevent an allergy from developing. This new knowledge threw the benefit of starting babies on rice cereal out the window!

This increased knowledge about introducing babies to highly allergenic foods came about around 6-10 years ago.  That’s when experts started to question the tradition of starting babies on infant cereal. They went back to the drawing board and looked at exactly what was important when introducing foods to babies. It came down to the need for iron. So recommendations were revised to include ALL food sources that are good sources of iron.

When people heard that meat was now recommended as a first food, some thought this automatically meant that infant cereal was no longer recommended AT ALL. This wasn’t true, it’s still included in a parent’s arsenal of foods that are high in iron.

Here are the current recommendations from several organizations about which foods to feed baby. You’ll notice that they all include iron-fortified infant cereal as one of the options: