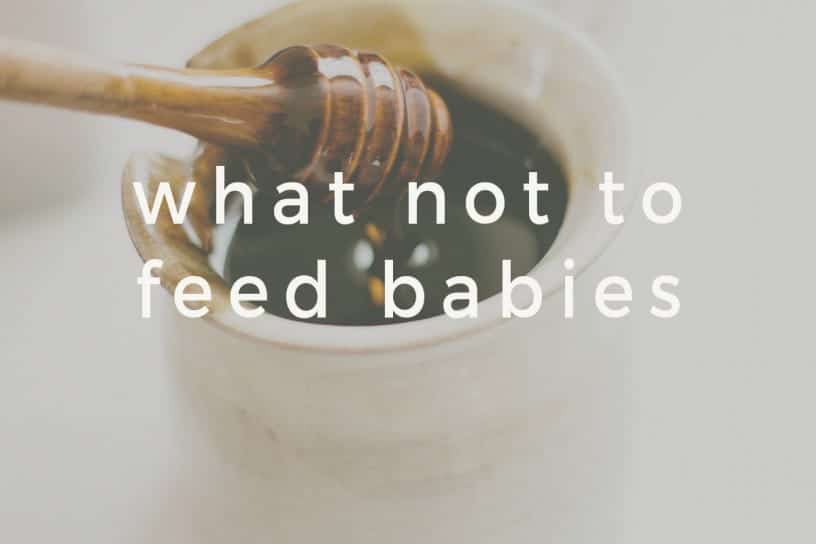 There are certain foods that should never be given to babies.

There are other foods that should be altered in texture, size, or shape before given to babies.

There are other foods that are not particularly healthy and should rarely be given to babies.

foods that should never be given (until a certain age):

Yes, it’s not recommended to feed infants anything other than breastmilk or infant formula until at least 4 months old. But, I wanted to mention these foods because I’ve had mothers ask me whether it was safe to feed these foods to their older babies. These vegetables are high in nitrates. Before the infant’s body is mature enough to handle solid foods, these dietary nitrates could cause a condition called infant methemoglobinemia (aka baby blue syndrome). In this condition, the capability of the blood to carry oxygen from the lungs to the cells of the body is reduced. Essentially, the baby starts to suffocate from the inside out. If your baby is formula-fed, don’t use well water to make the formula until it has been tested for safe levels of nitrate.

This is mainly an issue with babies and iron (I know, I know,  I keep talking about iron but it really is so important!).

All three of these factors combined can have a huge effect on a baby’s iron status. Wait until baby is at least 9 months old before offering cheese or yogurt. And, it’s best to wait until 12 months before switching baby over to drinking whole cow’s milk.

It’s rare but honey could potentially contain spores of the bacterium Clostridium Botulinum. These spores survive pasteurization so it doesn’t matter whether the honey is raw or pasteurized. Before one year old, the baby’s immature colon can incubate and produce the botulinum toxin from the spore. Even though the likelihood is small of a baby getting botulism from honey, it’s a potentially lethal condition, so it’s best to prevent its occurrence as much as possible.

These are higher risk foods for choking

foods that should be altered in texture, size, or shape

These have a very “stick to the roof of your mouth” type of texture, which can be hard for someone (aka a baby) who is just developing the facial muscles to move food around his mouth. These present as a choking hazard and as such, should be mixed in with a soft puree (infant cereal, yogurt, apple sauce, etc) or used as an ingredient in baking. When your child is 12 months old, you can spread a thin layer of these “butters” on toast or crackers. Eating a spoonful should be discouraged until the child is at least 4 years old.

Fruit such as grapes, large blueberries, and cherry tomatoes should be cut into quarters. The round shape and the size of these fruits can get caught in the trachea (windpipe) and cause a child to choke and suffocate. Cutting in half is not sufficient because the round shape is still there.