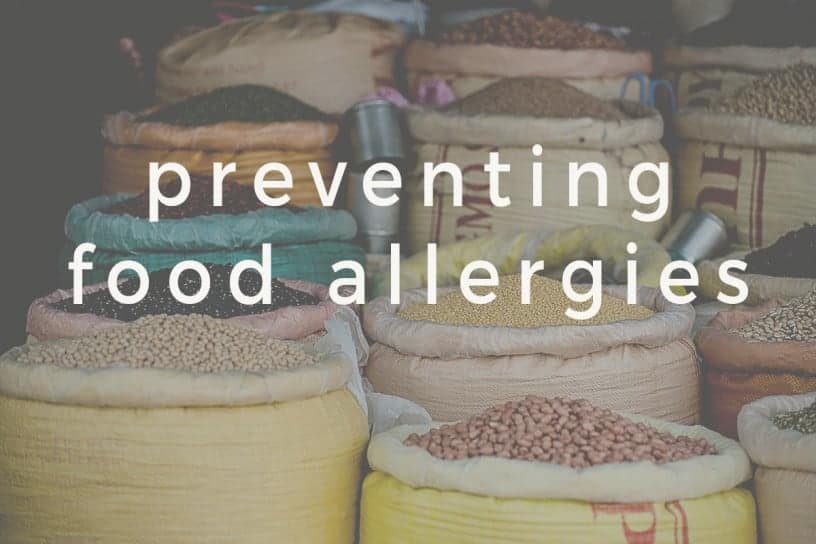 Considering a food allergy could be potentially fatal if a child accidentally ingests the food allergen, prevention is certainly something to aim for. Unfortunately, scientists have yet to isolate the exact mechanism that causes a person to develop a food allergy.

what is a food allergy?

Compared to a food intolerance, a food allergy always involved the immune system. A classical allergy is when a protein found in food (the allergen) causes the immune system to release IgE antibodies. These antibodies are responsible for the allergic symptoms: hives, swelling of the mouth, tongue, and airways, vomiting, and fatigue. If not treated immediately, the reaction can be fatal. It is called an abnormal response to a normal, harmless protein. Our bodies use the IgE response to attack foreign bodies such as bacteria and viruses that could cause harm. When a person has a food allergy, this person’s body has mistaken a harmless protein for a vicious invader.

which foods can cause an allergy?

While any food count potentially cause an allergy, 90% of food allergies are attributed to:

Our intestines are lined with cells that are held together by tight junctions. These junctions hold the cells close together so as to prevent proteins from passing through into the blood. A baby is born with more loosely connected cells. As the baby matures, the tight junctions bring the cells closer together. The newborn baby’s liquid diet creates an additional barrier as it coats (or paints) the intestine. With this knowledge of the developing child’s intestine, recommendations were made around the year 2000 to delay the introduction of the top 9 food allergens until the space between the baby’s intestinal cells closed up around 12 months.

Parents followed these recommendations but the rate of food allergies still continued to climb. Clearly, delaying the introduction of these foods was not the solution. Scientists went back to the drawing board. It’s now shown that these foods should be introduced once solids are initiated: around 4-6 months. In the Learning Early About Peanut (LEAP) study children at high risk of developing a peanut allergy were placed in one of two groups: Group A was told to avoid feeding peanuts to the children until they turned 5. Group B was told to feed a peanut snack 3x/week starting between 4-11 months old. At age five 17% of the children in the avoidance group (A) had developed an allergy to peanuts while only 3% of the children in group B did.

There’s a theory behind this observed effect. The body has an amazing barrier to the outside world but if something gets past the barrier, the body instantly analyzes the material to determine whether or not it is a threat to the health of the body. When it comes to food, the normal way our bodies determine that the food is not a threat is by ingesting the food, digesting it, and absorbing the nutrients. When this happens, the body understands that you have fed it food and accepts the material as non-threatening. But if you don’t eat a particular food and instead, this food finds its way inside you via another mechanism (for example, low-dose exposure through air particles on the skin, especially if eczema is present), the body has not established that this is non-threatening. Alarm bells go off and IgE antibodies are called upon to deal with the offender.

is my child at risk?

Babies who have either a parent or a sibling with ANY type of allergy are considered more at risk. The relative doesn’t have to have a food allergy. It could also be a seasonal allergy, environmental, asthma, or eczema.

When babies have a first degree relative (parent or sibling) with an allergy, this baby then has a 20-30% chance of developing an allergy. The risk drops to 10% when there’s no family history.

what you can do