Home / Miscellaneous / Meat is Carcinogenic and You Shouldn’t Freak Out 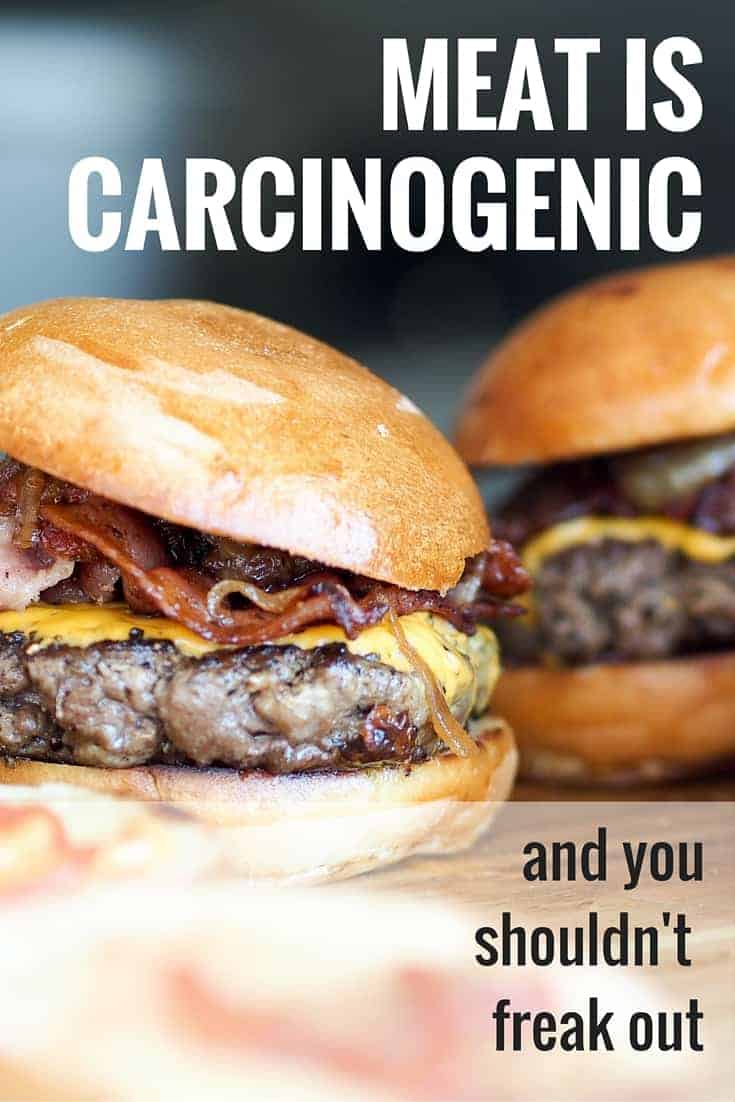 A headline in the UK’s Telegraph reads “Bacon, ham, and sausages a big a cancer threat as smoking, WHO to warn.”

I’m a Dietitian and I should know better, but I’m still human. So I reacted like most people who just finished a lunch featuring garlic ham sausage. I stood up and screamed “My wurst fears have been realized!”

If this was your reaction too, read on. You probably don’t need to freak out.

Red meat = beef, lamb, pork, and any other meat that looks red when raw

The Cancer Research of UK has a great article highlighting the difference between evidence and level of risk. This infographic highlights how much the level of risk differs between tobacco usage and meat consumption.

Why is Red Meat Considered a Carcinogen?

One of the suspected reasons red meat increases the risk of cancer is the presence of heme, which gives the meat it’s characteristic colour. Heme is a component of hemoglobin, a protein found in the blood that contains iron and transfers oxygen to the body’s cells.

Based on my knowledge of human physiology, here’s my interpretation. The human body’s capacity for iron absorption is dependent on the body’s need for iron. If a person is low on iron or has a higher requirement (such as during pregnancy), the body will increase the rate of absorption. If a person’s iron stores are adequate, only a minimal amount of iron will be absorbed. The rest will travel unabsorbed through the small intestines to the colon. This is where too much iron can cause problems.

So, you want to avoid getting too much iron. Eating plant-based foods will accomplish that. But for those who NEED iron, a little meat can be an important part of their diet. Iron deficiency is also a serious cause for concern. Iron deficiency anemia reduces quality of life by causing extreme fatigue, brain fog,  and lacklustre skin, hair and nails.

The following groups of people are at risk of iron deficiency:

So adult men are the ones who really need to watch their meat intake. Unfortuately, they are typically the highest consumers of meat.

If you eat processed meat everyday or several times a week you should be cutting down.

If you eat red meat everyday you should be cutting down.

If you eat a large quantity of meat in one sitting, you should cut down your portion size.

If you only eat red or processed meat occasionally, sit back and relax. Worrying will only increase your stress levels and give you cancer. 🙂

5 Ways to Cut Down on Meat

In general I feel that most omnivores in Western countries could stand to lower their meat intake. If you’re curious, I have 9 good reasons for the call to eat less meat.

Here are a few practical ways to go about it:

People often want to know what Dietitians themselves eat. Well, my family is flexitarian. Our diet is mainly plant-based, but we also enjoy meat, poultry, and fish about three times a week. On those occasions, the meat is in small portions. From my education and reading of the scientific literature, I firmly believe that this is a healthy, balanced way to eat an omnivorous diet. I also believe that vegetarian and vegan diets are healthy as well, so I fully support my friends, family, and clients who choose to eat this way.