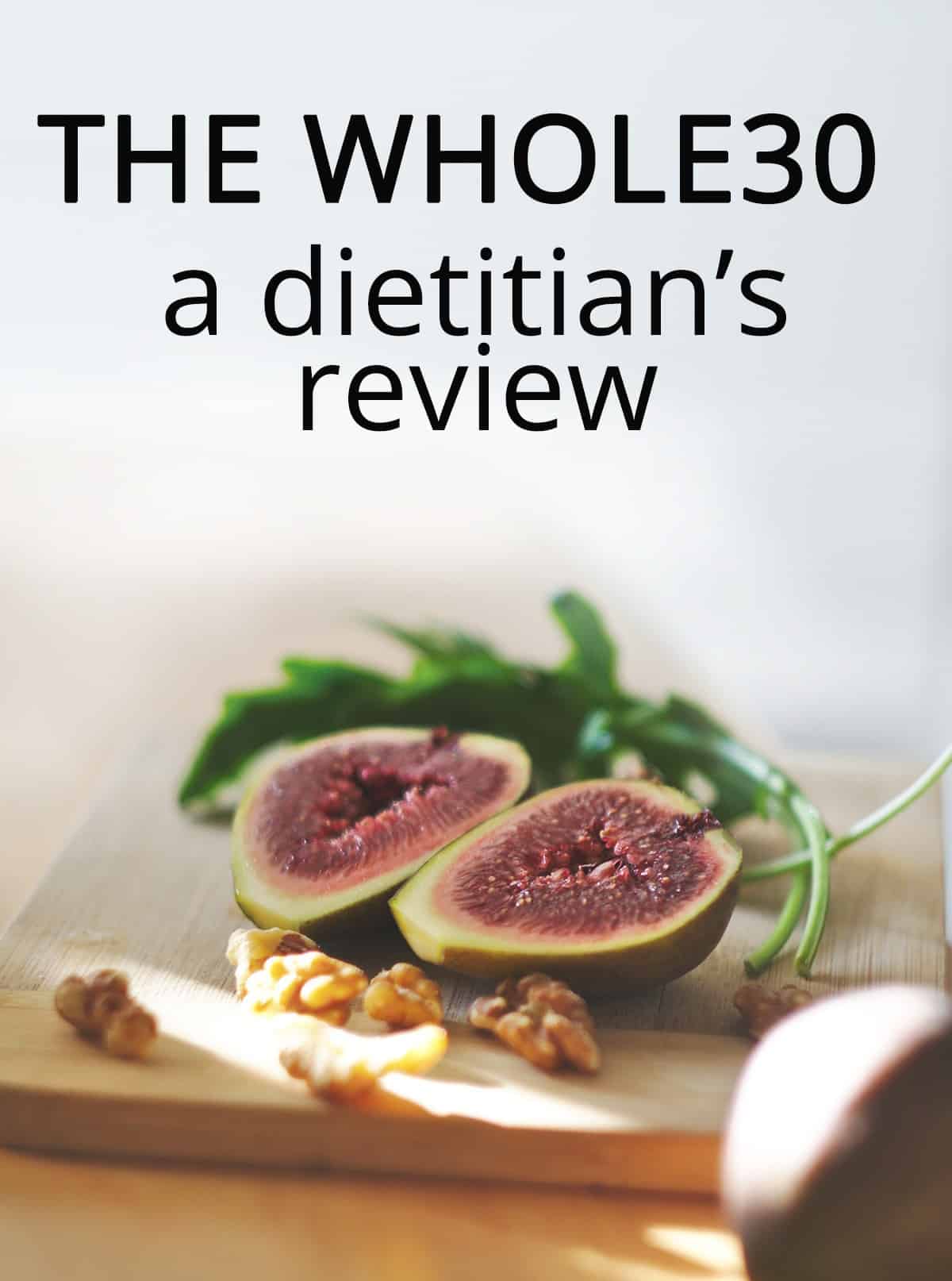 I get asked about the Whole 30 diet on a regular basis. I guess it’s pretty popular?

About time I let you know what this dietitian thinks!

Founders Melissa and Dallas Hartwig have put together a strict elimination diet that you’re supposed to follow for 30 days. And when I say strict, I mean strict. They even go so far as to say “Don’t even consider the possibility of a “slip.” If you accidentally eat something on the “avoid” list, you’re required to restart back at day one. Ouch. 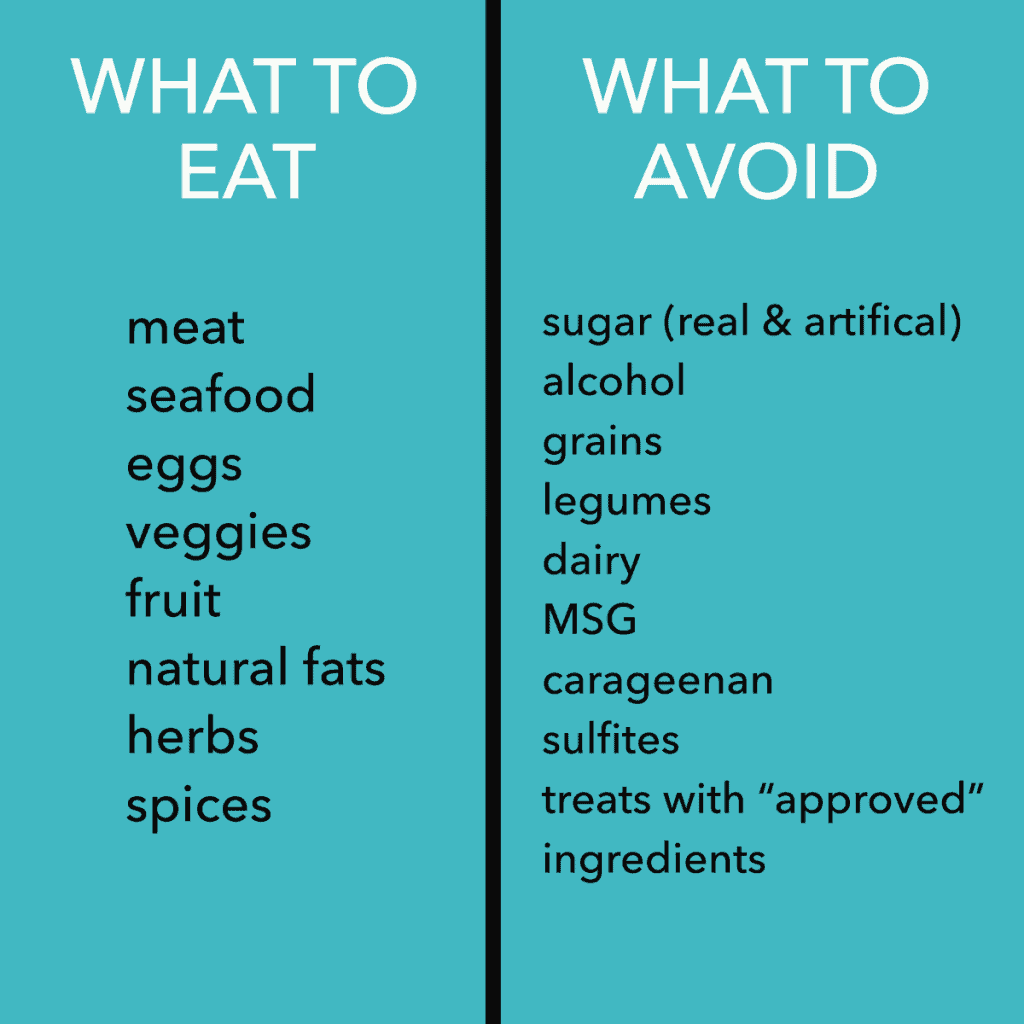 The aim of the diet is to “put an end to unhealthy cravings and habits, restore a healthy metabolism, heal your digestive tract, and balance your immune system.” They promise that the diet will lower chronic systemic inflammation.

However, there’s absolutely no clinical evidence to back up these claims.

Yes, a lot of foods on the “avoid list” are associated with increased inflammation, such as sugar, highly processed foods, and alcohol. Yet, many of the foods on the list have actually been shown to improve gut health and immunity…

The authors seem to have arbitrarily chosen foods as good or bad, without looking to science. This isn’t really surprising, since they have absolutely NO background in formal nutrition education.

One of the main focuses of the program is to eliminate highly processed foods. The creators even go so far as to say that you shouldn’t try to re-create your favourite treats such as pizza or cookies with ingredients on the approved list.

You might think that, as a Dietitian, nutrition expert, and promoter of healthy eating, I would be totally on board with a diet that seeks to eliminate highly processed foods. I’m not.

Yes, I do want people to rely less on processed foods and prepare more healthy, wholesome, real food meals. Dietitians have (roughly) the same end goal in mind as the founders of the Whole 30. However, I don’t believe the process by which the Whole 30 founders try to accomplish this goal is healthy, or likely to succeed.

Here are six problems this Dietitian has with the Whole 30:

1: the whole 30 is a short term solution to a long term problem

As cleverly coined in the name, you’re supposed to follow the diet for 30 days. I came across a brief mention of slowly adding the restricted foods back in to test for reactions. But, from all the stories people tell about the Whole 30, I get the strong impression that the intention is just to do the diet for 30 days. If you magically changed your habits during that time, you can keep doing it.

Unfortunately, this magic only happens for a rare few. Most people will either…

a) give up before the 30 day challenge is over.

b) feel better or lose weight from having cut out processed foods during the challenge, then go back to their regular habits, gain weight/regain symptoms, feel bad about themselves, and do another 30 days. The weight goes up and down, the body becomes seriously confused, and the person’s metabolism and health ends up suffering.

What works better is to choose ONE thing to change at a time. It’s not as dramatic and doesn’t sound as exciting, but it’s effective. Maybe choose one day a week to try a new recipe. Or decide to cut down on the sugar and cream you put in your coffee by slowly weaning off them. Or switch your morning cereal for something with more staying power like eggs and toast. 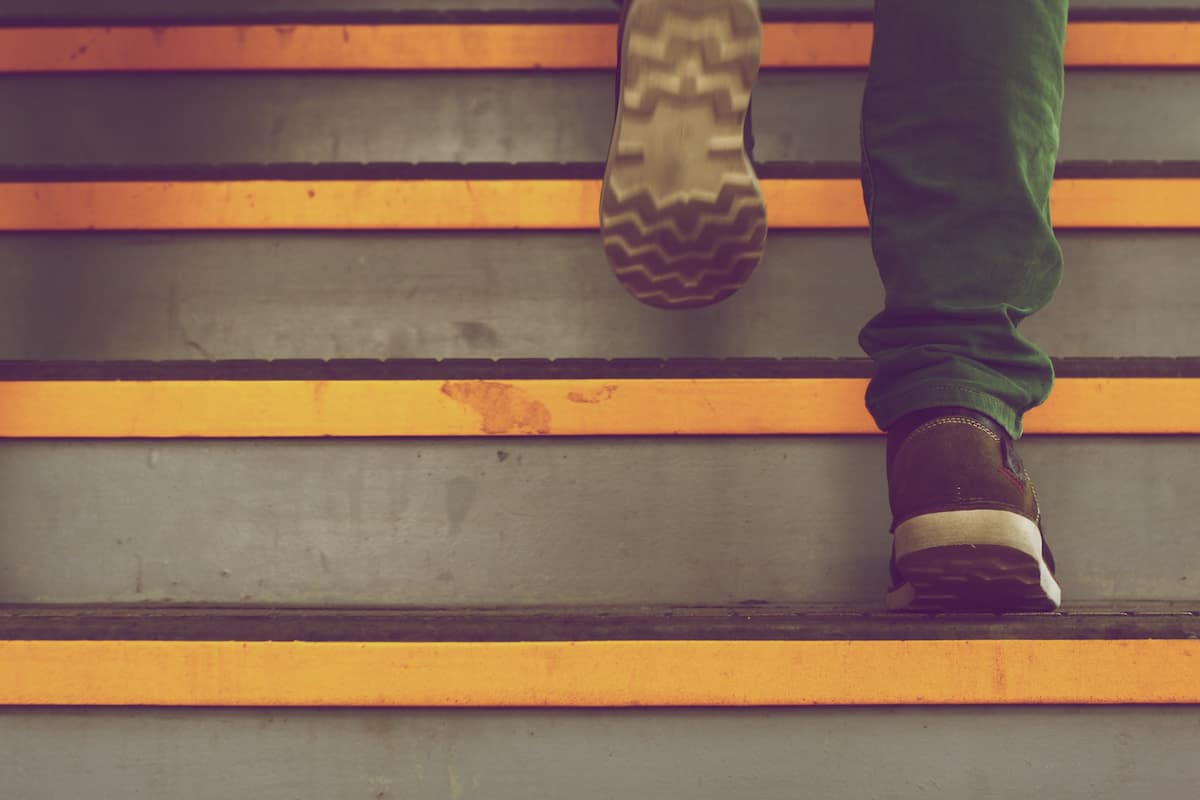 “This is not hard. Don’t you dare tell us this is hard. Beating cancer is hard. Birthing a baby is hard. Losing a parent is hard. Drinking your coffee black. Is. Not. Hard.”

Well, first of all that’s a blatant oversimplification. Cutting cream and sugar out of coffee is only a very small part of the dietary changes this diet requires.

But so what if I do find drinking coffee black hard? Does that make me a failure? I must be weak if I can’t stick to a diet for 30 days. I can birth a baby but I can’t drink black coffee? How dare I suggest it?

Well, diet changes ARE hard. The evidence is all over the place. There’s no shame in that, contrary to what the whole 30 authors try to make you feel.

Speaking of shame, let’s talk about the “good” vs “bad” food philosophy at the core of the whole 30. When you see food as either “good or bad” you’re drawing lines in the wrong places. With the line drawn at “this food is bad, don’t eat it,” when you finally break down and have a “bad” food, as everyone does, it means you’re doing something wrong. You’ve failed, you’ve crossed the line you’ve drawn for yourself. The result is that you throw caution to the wind, and end up eating way more than you would have if you saw it as a food to enjoy in appropriate amounts!

When you dichotomize food into value-based judgments, it has a strong negative effect on your emotional relationship with food… and with yourself!

When you stick to eating the “good” foods, you internalize those values and start to feel like a righteous, moral, upright, overall good person. But if you slip up, feelings of shame, remorse, and guilt overcome you, and you start to feel like a useless, unloved, devalued, downright bad person.

You might think I’m exaggerating, but I’ve seen first hand that categorizing foods as “good” and “bad” has a profoundly negative effect. Over the years I’ve helped many people  develop a truly healthy emotional relationship with food, and often this was at the heart of their codependent relationship with food.

It works at a subconscious level, but thoughts of food can and do become your identity and security, or your source of insecurity.

The reality is that food choices have NO basis in morality. They do NOT define you as a person. You can eat all the crap in the world and it’ll make absolutely zero difference on your worth as a person. 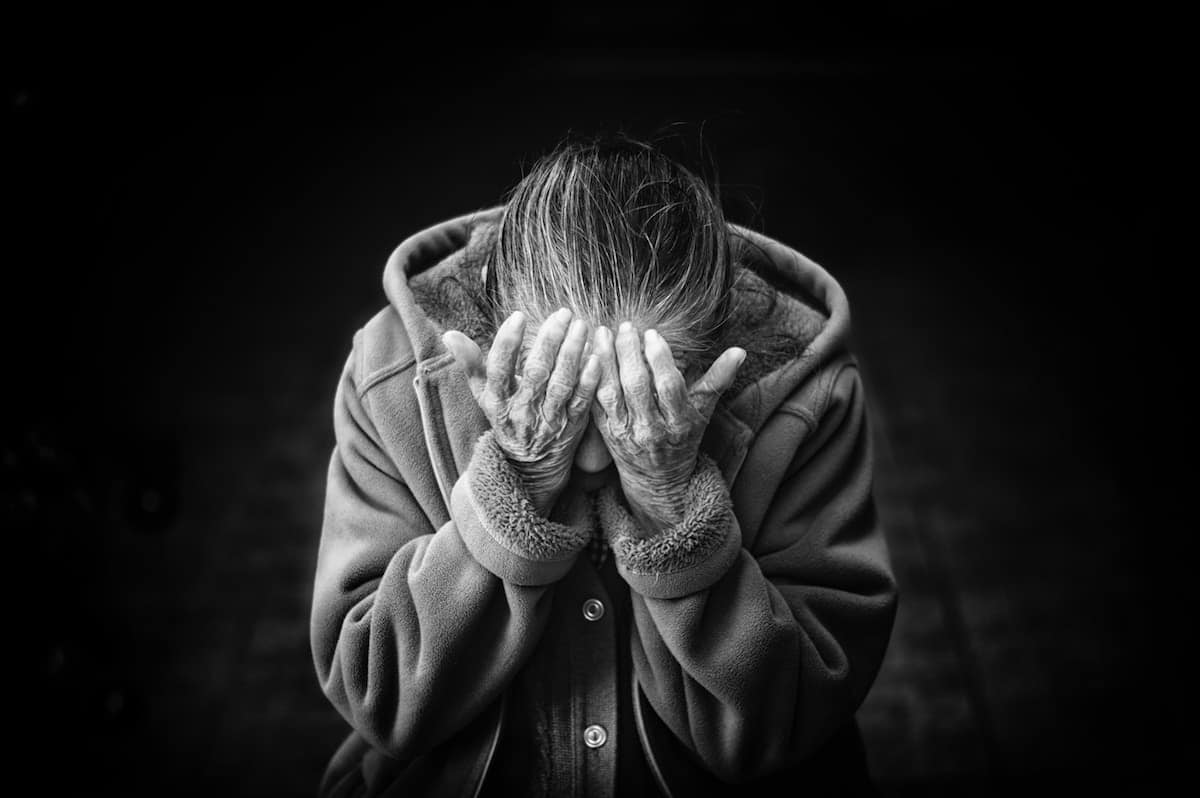 3. the whole 30 is not based on scientific evidence

The authors have cherry-picked foods to eliminate, seemingly based on personal preference, or possibly based on how “evil” they’re currently trending in the world of pop nutrition (I’m looking at you, sugar!). Nutrition As I Know It has done a great job of fact checking the claims in the Whole30 book. Spoiler alert: they’re nearly all false.

The evidence actually shows that…. 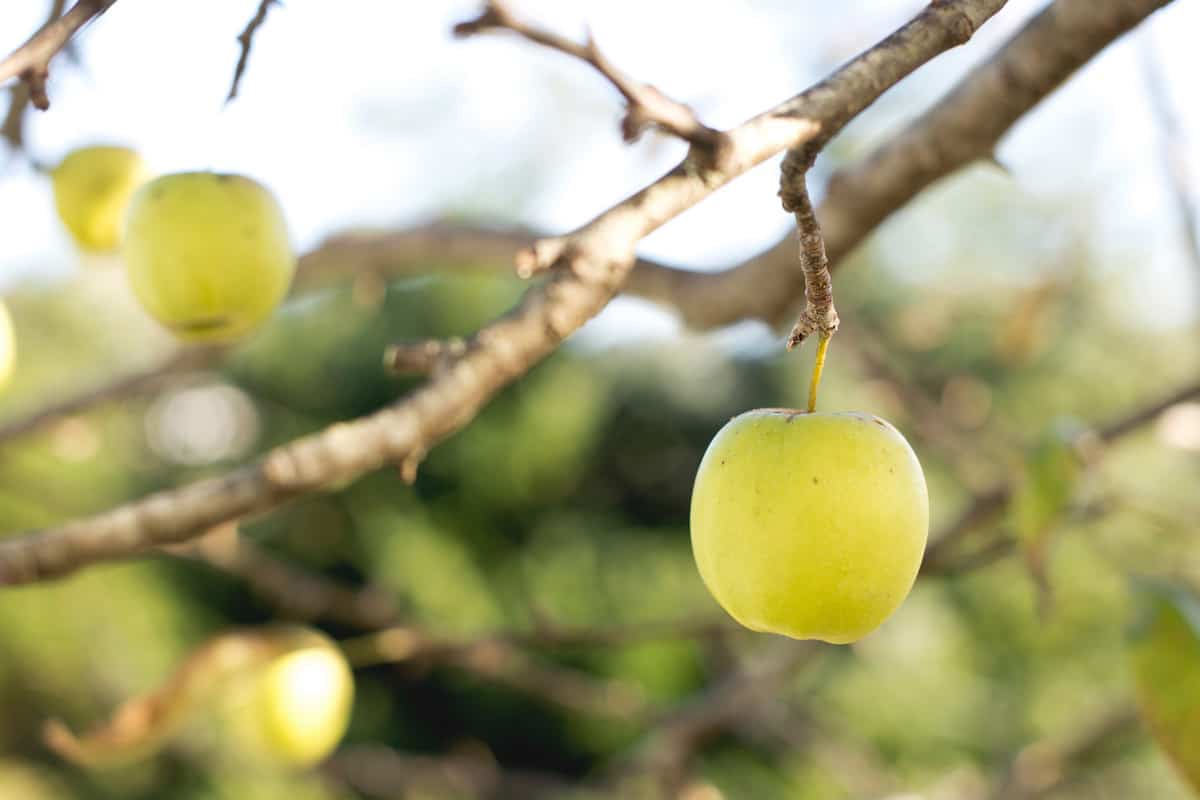 4. the whole 30 is filled with inconsistencies

On their website they say, “Just a small amount of any of these inflammatory foods could break the healing cycle.” So then, why does any of the following make sense? 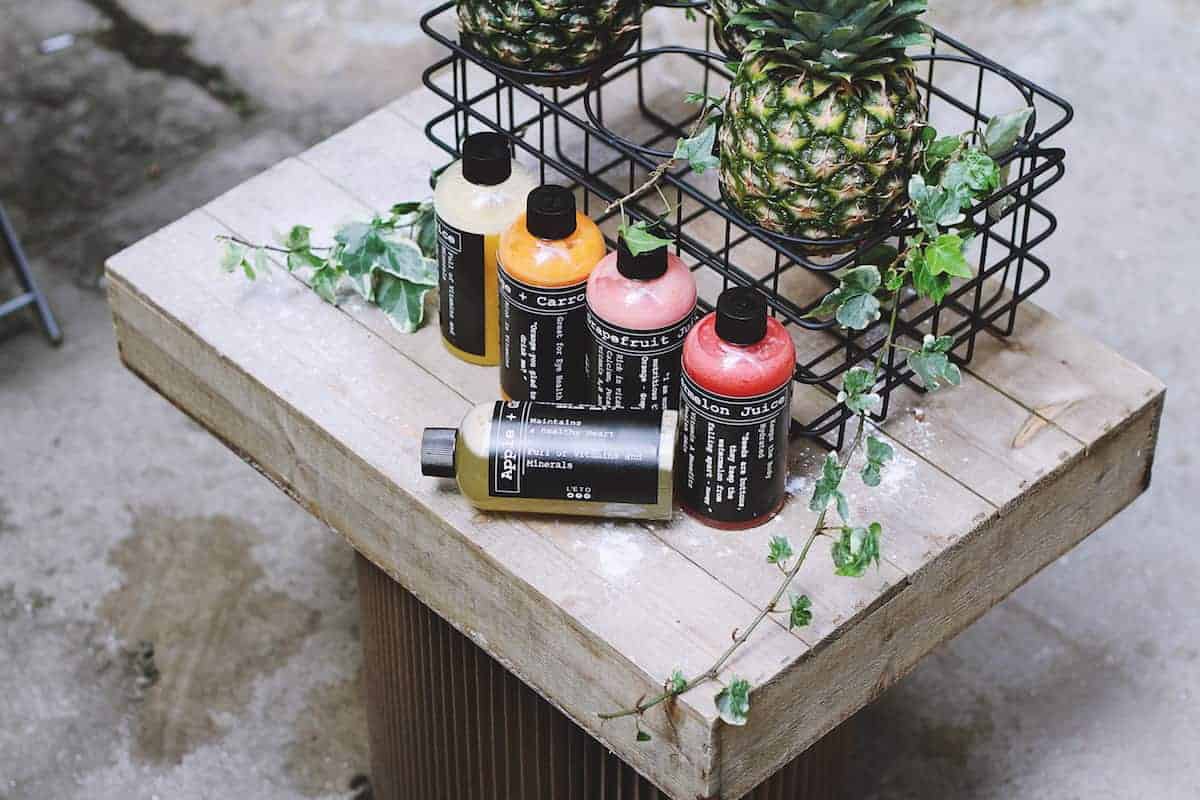 I think this screenshot speaks for itself…. 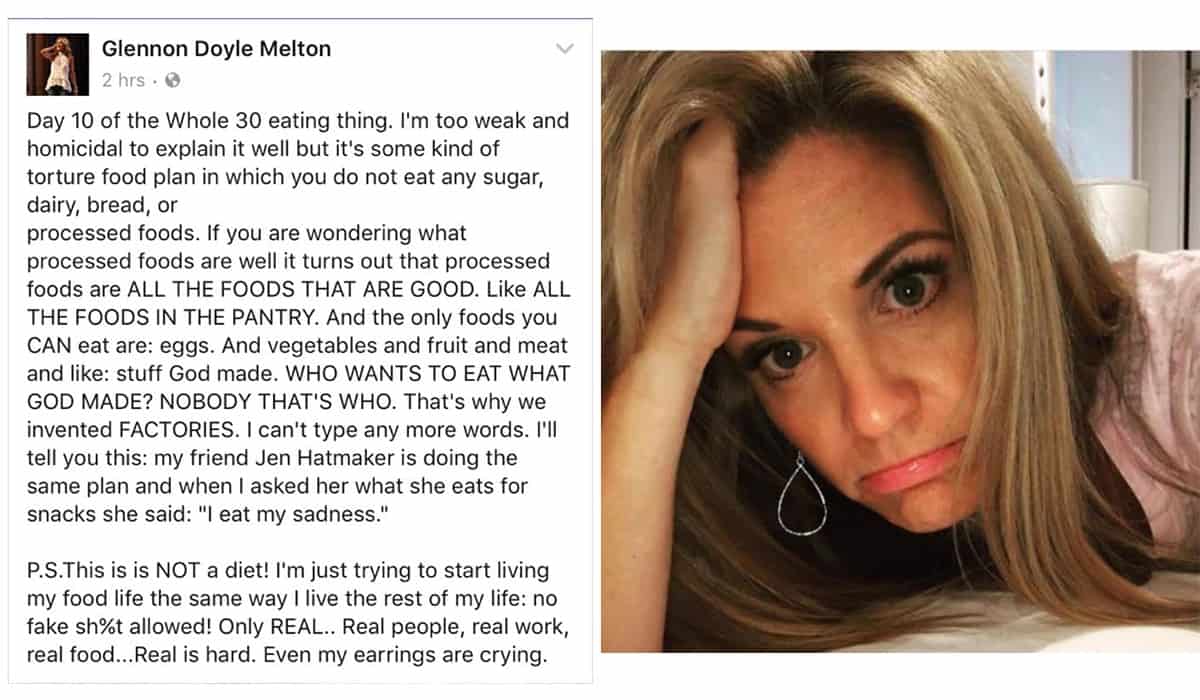 Cutting out most of the foods you previously enjoyed is going to put a serious damper on your relationship with food. The diet doesn’t even permit you to re-create some of your favourite foods, such as pizza, with approved ingredients. The Whole 30 calls this “sex with your pants on,” abbreviated to SWYPO. This is a polite way of saying “dry humping” I guess?

Since they started the sex talk, let’s run with it and compare your relationship with food to a marriage relationship. You decide you want to improve your marriage relationship. So you make up a list of all the things that bring you joy, and arbitrarily cut out some of them. Dating is no longer allowed. You can go on runs, but no walking. No more sex. Certainly don’t do anything that even resembles sexual activity because that would be SWYPO and that would be fun.

The whole thing is so ridiculous it’s beyond incredulity… none of this is logical at all! Cutting out joy is NOT the way to improve ANY relationship, including your relationship with food.

Since the tagline of my website is “helping you rediscover the joy in eating,” I’m clearly quite passionate about focusing on JOY as the key to healthy eating.  How are you possibly going to continue to eat veggies for the rest of your life if you find it a chore or an obligation? You’re an adult and you’re going to make your own decisions. Forcing yourself to eat something you don’t enjoy is just unlikely to happen. If you do, you’re bound to want to reward yourself for the chore by eating something you DO enjoy.

6. the whole 30 is not sustainable for the planet

Legumes, such as lentils, peanuts, and beans are nutrient-dense foods that have a low environmental impact. Grains such as rice and wheat are also crops that are key to feeding the world. The Whole 30 eliminates these in favour of more resource-heavy foods such as meat, fish, and vegetables. The emphasis on organic food only amplifies the unsustainability of the diet, on both the earth and the wallet.

It’s an elitist diet. It’s expensive and it’s not sustainable for the planet or the human race. The whole world couldn’t possible subsist on these foods alone. There wouldn’t be enough food.

Imagine for a second being a part of the population group that is excluded from being able to follow this diet, living on a very tight budget, and then reading an article proclaiming that the Whole30 was the only way to live a healthy, productive life. How incredibly disheartening to feel utterly excluded.

The truth is that people truly can live healthy, productive lives on a low budget diet. But it requires basic staples such as beans and grains, which are not toxic. 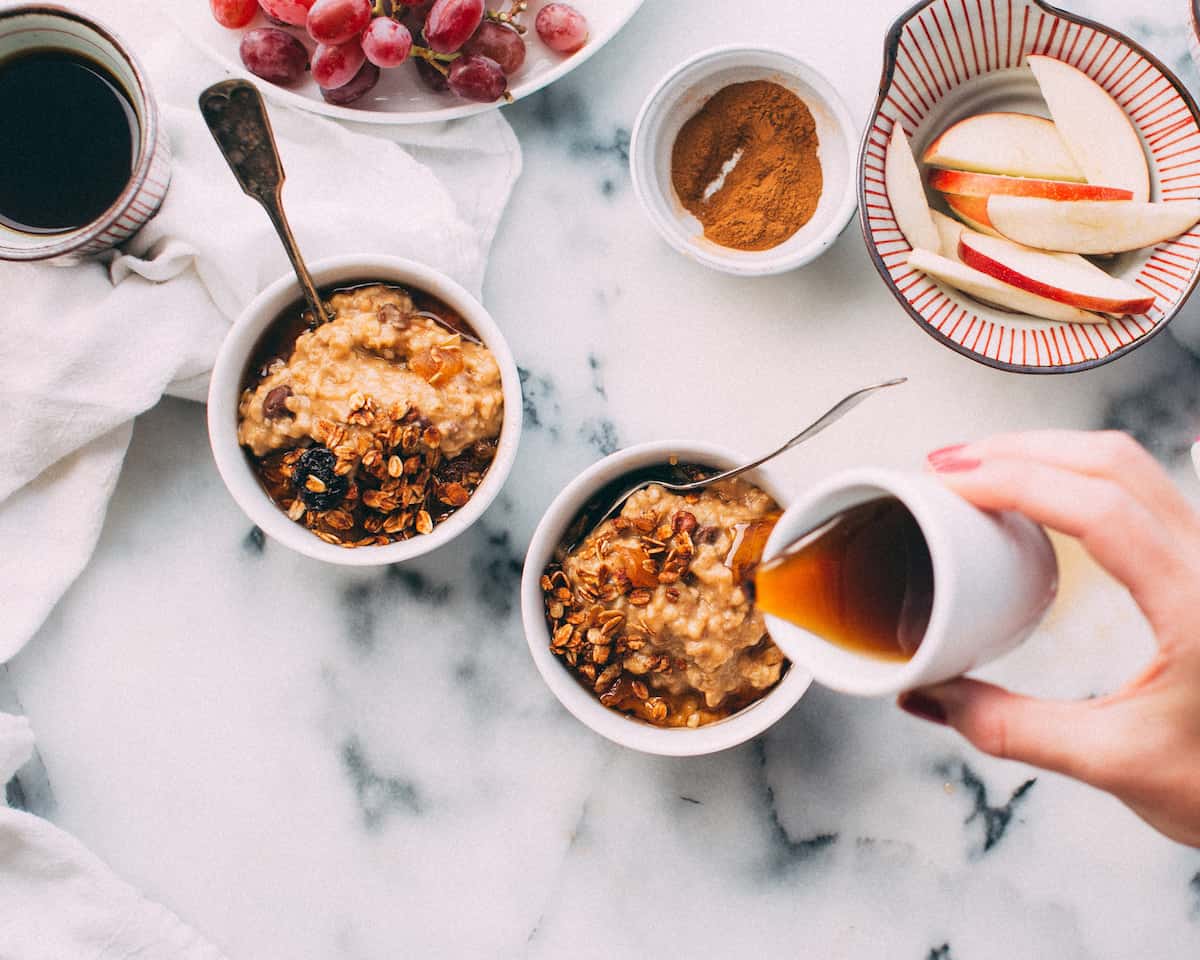 what to do instead of completing a Whole 30

There’s hope outside of the Whole 30! If you’ve thought about or have attempted or have even completed a Whole 30 or a similar type of “clean eating” trend, I know you have good intentions. You just want to eat healthier, right? Or perhaps, despite the authors adamant claims that it’s not a weight loss diet, you’ve heard stories about people shedding a few pounds on the Whole 30 diet, and you’re hoping for the same results. I get that.

I’m here to tell you that there’s a better way. Changing habits is hard. It takes time and it takes changing some mindsets.

The best part? You can have your cake and eat it too 🙂